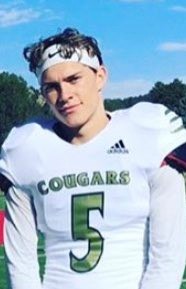 After getting his name out there more and talking to schools in the Spring, Noah felt he had a huge shot of getting a scholarship offer during his senior season.

Not playing this fall, doesn’t only affect his long term goals but also affects him mentally, just like many athletes out there. Football is his way out, and sometimes it’s the only thing that keeps him going. Postponing the season hasn’t only hit Noah hard but has made him very stressed about his future.  He believes that many athletes, like himself, do good in school because they have something pushing them, that is football for him. Football is what he works for every day, football is what keeps him going every day, and football is what motivates him to be a better person and strive for greatness.

If Noah does not get an athletic scholarship he will most likely search for a different route because financially he could not afford to walk on to most schools. To not have the opportunity to be recruited his senior year will change his life path dramatically, as this is what he’s been working for since the 3rd grade.