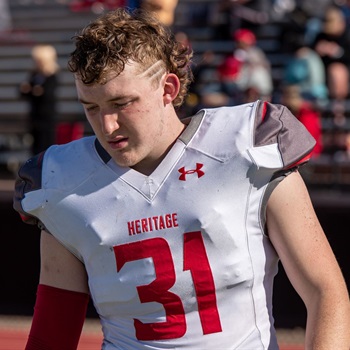 Chris will no longer have a chance at breaking the Heritage school tackle record with only 7 games  in the season. Without access to the school weight room or access to his coaches it’s difficult to continue to train. The most important thing he will miss is being with his teammates again. Some players will be moving on to college football early, such as two of his teammates Terrance Ferguson and Erik Olsen. Chris is frustrated at how this decision is dividing teams and doesn’t think there is anything worse that can happen to a football team who has been playing together for years. He knew that this Fall football season would determine if he was going to play in college or not.  He may not have to worry about this decision as it has been made for him by postponing the season until Spring – he won’t play in college.

Chris will have to consider going to community college first and then transferring to a four year school, or potentially not attending college for now and getting a trade job until he has saved up enough.  He desperately wants the opportunity to play football, his favorite sport of all time, at the next level.